Virginia Commonwealth University's Grace Street Theater at 934 West Grace Street in Richmond, VA is a little known but successful example of renovation and adaptive use of a historic property.

The building originally opened in 1935 as the Lee Theatre, a neighborhood movie theater showing second-run films. It served for a brief period in the late 1950s/early 1960s as an art house theater. In 1965 it became known as the Lee Art Theatre and began presenting adult films along with burlesque style dancers. 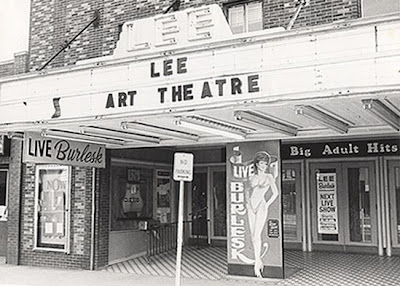 The Lee Art Theatre shown here ca. 1975 in its heyday as Richmond's premier X-rated movie and stripper theater. By 1993, patrons of the Lee Art Theatre paid $10.00 to see films that played continuously for nearly 14 hours. Dancers would perform every few hours.

VCU purchased the property in 1993 and after extensive renovations the building re-opened in 1996 as VCU's Grace Street Theater. The theater is now the primary performing venue for VCU's Department of Dance and Choreography which operates the building and the box office. VCU's Department of Art History also uses the building for many of its classes. In addition to its University uses, the 225 seat theater is available to the Richmond community to rent for films, lectures, and other events.

This online exhibit was created (by me) three years ago to commemorates the 70th anniversary of the 1935 opening of the theater. It is basically a time line history using numerous images and resources housed in VCU Libraries' Special Collections and Archives (where I work).
-- Ray Bonis.

What are YOUR memories of the Lee Art Theatre?

"La Dolce Vita" played here, too. In the years prior to its conversion to a X-rated theater, the Lee was like The Westhampton of today.