I received four pages of an article from the July 17th, 1858 issue of Harper's Weekly today from a vendor on Ebay. The article details the moving of the remains of President James Monroe from New York to Richmond. His tomb would be a centerpiece for Hollywood Cemetery and brought the cemetery a legitimacy it needed at the time. I've never seen these images before. More about the event from Richmond Discover Our Shared Heritage Travel Itinerary - a site sponsored by the National Park Service's Heritage Education Services, the City of Richmond, Richmond National Battlefield Park and the Maggie L. Walker National Historic Site, and the Virginia Department of Historic Resources, in partnership with the National Conference of State Historic Preservation Officers.

In 1858, the Commonwealth of Virginia reinterred the remains of President James Monroe there and erected the centerpiece of the circle: the monumental James Monroe Tomb, a National Historic Landmark. Governor Henry A. Wise led the efforts to return the remains of James Monroe to his native state from the place of his death and burial in 1831 in New York City. Wise’s efforts came after failed attempts to construct a Washington Monument on President’s Circle in 1847, and to erect a monument to Monroe in New York in 1856. After receiving permission from Monroe’s descendants to bring him back to Virginia, Wise obtained state financial support to purchase a site and construct the monument. Monroe’s remains were returned from New York on July 4, 1858 with great pomp and ceremony and a military honor guard. - from Richmond Discover Our Shared Heritage Travel Itinerary

Here are the images and the text
from the
July 17th, 1858 issue of Harper's Weekly -
just click on the image for a larger view. 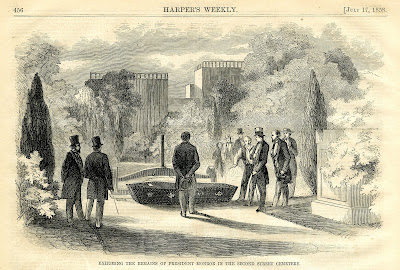 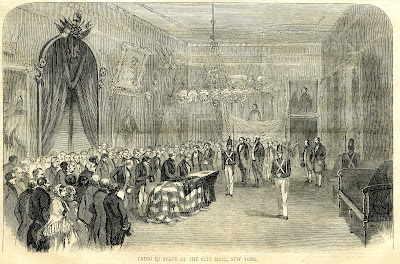 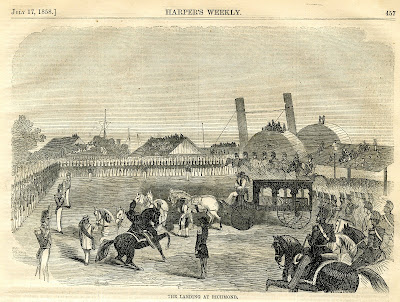 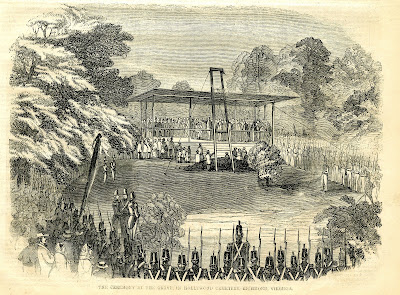 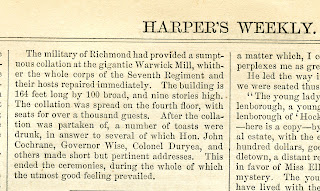 Click on the images for a larger view -
All from the July 17th, 1858 issue of Harpers Weekly.

-- Ray B.
Posted by Shockoe Examiner Staff - see bottom of blog entry for the specific author.