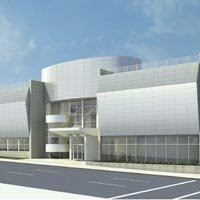 Below is a great letter about the proposed new art gallery for VCU. Let us hope that VCU does not raise enough money for this project and another building design is selected. The original article that Selden refers to can be found HERE.

Thank you for printing an image of the proposed art gallery planned by Virginia Commonwealth University for a site near the Jefferson Hotel, and congratulations to the owners of the Jefferson for refusing to have this structure constructed near their historic hotel (“Design Clash,” Arts & Culture, July 22). The picture of the astonishingly unattractive gallery serves to remind Richmonders that, even in the post-Trani era of VCU, the cityscape of this town is still in danger from an entity that pays no real-estate taxes but still imposes wildly inappropriate building designs on our landscape.

The quotation from Richard Toscan, dean of the school of the arts, was as much a revelation as the image of the airplane hangerlike gallery: “I have always been very clear that if we built a gallery on my watch there would not be a single brick in the thing. We’ve got enough brick on this campus. … and we’re not going to hobble a major architect with brick.” Perish the thought that a new gallery should actually fit in with Richmond’s appearance or appear to be a part of the city as a whole. The strident cry of this functionary, reflecting the attitude so prevalent during the tenure of Trani, asserts that VCU will continue to dictate the path of our streets, the look of our buildings, and the atmosphere of our city with little regard for the existing fabric or sense of place.

The horrid irony is that, as Richmonders, we help pay the salary of bureaucrats like Toscan; we help pay for building projects like the ugly nuclear-plant art gallery; and we help finance the undoing of our city by an entity that cares little for the opinion of the residents of the place that has served as host to VCU for more than 50 years. In nature, the relationship between host and parasite is well known. Why the city of Richmond continues to endure the insensitive dictatorial policies of VCU, its aggressive and peculiar architectural design agenda and to indulge the personal and misguided whims of VCU officials is beyond comprehension.

Reminds me of the Media General/RTD complex. I could never understand how a company so rooted in Richmond could get it so wrong.