What's the history of the "Egyptian Building, Medical College of Virginia" ? 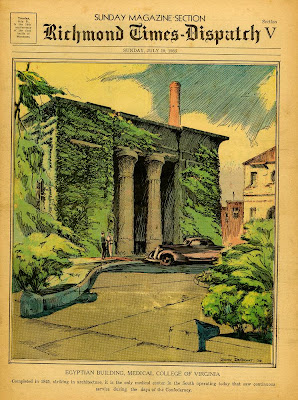 "Egyptian Building, Medical College of Virginia"
from the July 19, 1936 issue of the Richmond Times-Dispatch's
Sunday Magazine and Book Review section.
This is the second image we have reproduced by John W. De Groot (1915-1995) - the first one is Here. De Groot worked for the Richmond Times-Dispatch in the late 1930s as an illustrator and writer. He provided many of the illustrations for the TD's Sunday Magazine section at that time period. This issue is courtesy of Richard Bland. I will be posting more on De Groot and his great illustrations of Richmond scenes in future posts.
The Egyptian Building, 1223 E. Marshall Street, built 1844, was designed by architect Thomas S. Stewart (1806-1889) and is considered one of the finest extant examples of the rare “Egyptian Revival” style. The building was originally built for the Medical Department of Hampden-Sydney College which in 1854 became an independent entity, the Medical College of Virginia (MCV).

In 1938-39, the Richmond architectural firm of Baskervill and Son made modifications to both the exterior and interior, including creating a neo-Egyptian auditorium. The is still used by students, faculty, and staff on the MCV campus of VCU.

Visit the Archives of the Tompkins-McCaw Library for more information about MCV's history.