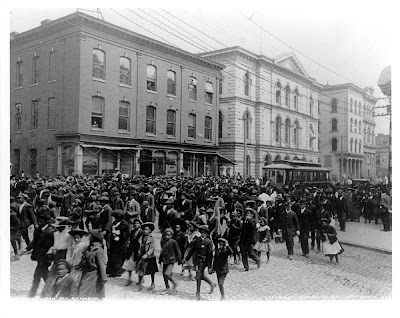 
The image above shows a parade of Richmond, Virginia's African Americans celebrating Emancipation Day, Monday, April 3, 1905. The parade is shown here marching at 10th and Main Streets with the Shafer Building at the corner and the old Custom House and Richmond Post Office building in the background. It was one of the few buildings to survive the evacuation fire of 1865. To the right of that building is the Mutual Assurance Society Building. The parade marked the fall of Richmond and not the anniversary of the Emancipation Proclamation.


This black and white image was originally taken by the Detroit Publishing Company which produced postcards. I haven't seen this image converted to a postcard. That would be a rare find. The image is from the Library of Congress. For more information about the event, read the two newspaper accounts below.

Below is an image of that same block with a completely different parade circa 1910. Maybe this street was used often for parades. 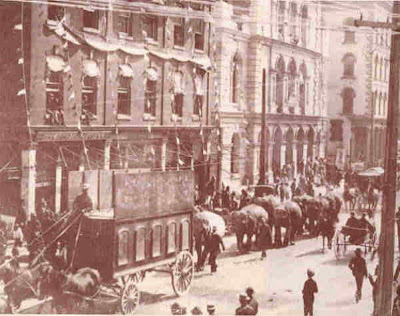 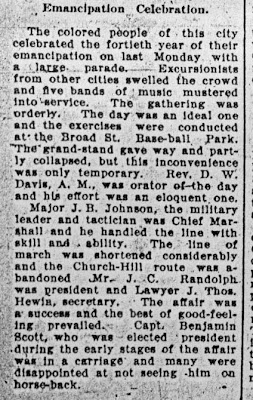 The colored people of this city celebrated the fortieth year of their emancipation on last Monday with a large parade. Excursionists from other cities swelled the crowd and five bands of music mustered into service. The gathering was orderly. The day was an ideal one and the exercises were conducted at the Broad St. Base-ball Park. The grand-stand gave way and partly collapsed, but this inconvenience was only temporary. Rev. D. W. Davis, A.M., was orator of the day and his effort was an eloquent one. Major J.B. Johnson, the military leader and tactician was Chief Marshall and he handled the line with skill and ability. The line of march was shortened considerably and the Church-Hill route was abandoned Mr. J.C. Randolph was president and Lawyer J. Thos. Hewin, secretary. The affair was a success and the best of good-feeling prevailed. Capt. Benjamin Scott, who was elected president during the early stages of the affair was in a carriage and many were disappointed at not seeing him on horse-back.
-- From the Richmond Planet, Saturday, April 8, 1905.

[Text below is taken from the Times-Dispatch, Richmond, Virginia, Tuesday, April 4, 1905.]

CELEBRATION OF DAY OF FREEDOM

Negroes Cheered "Dixie" on Their Emancipation Anniversary. Nearly every colored man, woman and child in Richmond, and the surrounding 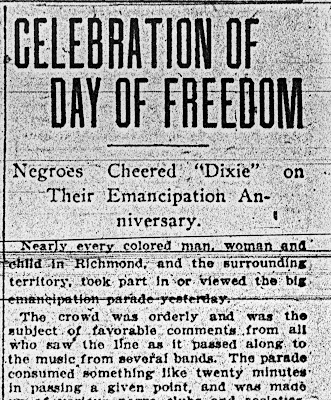 The crowd was orderly and was the subject of favorable comments from all who saw the line as it passed along to the music from several bands. The parade consumed something like twenty minutes in passing a given point, and was made up of various negro clubs and societies. An amusing incident was the cheering of "Dixie" on this occasion.

After the principal streets of the city had been marched over the crowds centered in the ball park, where the orators addressed the multitude on the subject most in mind. The principal speaker was D. Webster Davis, whose oration was the other speaker. During the speaking a board on the bleacheries broke and caused a little excitement, but no one was hurt. Closed With a Banquet Last night there was banquet of the leaders at Price's Hall, and at True Reformer's Hall a colored opera company held forth. The colored hotels and boarding houses were full to overflowing with excursionists and the ward was a dense mass of people all day and far into the night.

The thousands of local colored people on the streets were augmented by many from the country, who, in their gay rigs, added to the general interest in the parade. Old darkeys, with ante-bellum beards, marched beside negroes of the younger generation, and cooks, waiters, porters, washerwomen and barbers knocked off from work to join in the festivities incidental to the celebration of the day that really marks the fall of Richmond rather than the negroes emancipation.

Late in the afternoon a party of disorderly negroes got in a fight on Cary Street between Seventh and Eighth Streets. The row created some excitement, and four of the negroes were arrested and carried to the Second Station. The men engaged in the fight were on holiday and it was stated that the fight arose over comments on the parade. This was the only affair of the kind that marred one of the largest negro demonstrations the city ever saw.