Many Richmonders have probably heard of the “beer vaults” that are somewhere under the park, but few know of their history or how extensive they are. A pencil and ink plan from the City Engineer’s office records in the archives of the Library of Virginia shows the position of the vaults and describes their considerable dimensions: six chambers, ranging from 30 to 60 feet long and arranged in a “L” pattern. The vaulted ceilings are approximately twenty feet tall. Considering a GRTC bus is about forty feet long, the large scale of these underground rooms is truly impressive.

An octagon sketched in pencil over the vaults presumably indicates the position of the park house directly above the brick rooms, which are drawn in red. An elaborate stairway with landings once served as access to the two entrances. The plan also notes the locations of a public spring (which still exists) below the park house, and a horse trough, both of which were to provide refreshment to horses and men making their way up the switchback road that wound between Fulton and Broad Street. The road is labeled “30 Foot Road Leading to Tunnel,” a reference to the famous Church Hill railroad tunnel which collapsed in 1925.

A large circular structure shown in the plan of the vaults on the very brink of the hillside remained a mystery until a newspaper clipping from 1941 was found that explained, “…the original vat used for brewing by Mr. Bacher stood just outside the entrance to the vaults but that was torn down some years ago.” The article goes on to defuse a proposal by Richmond City Council member Emmett Perkinson to use the vaults as an air raid shelter. More about Church Hill's history and Joseph Bacher HERE. 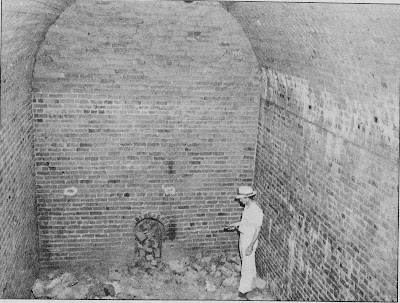 This photograph of the interior of one of the beer vaults, taken in the
1940s, gives an idea of the scale of these large storage rooms below the
surface of Chimbarazo Park.

According to that article, the vaults and vat were used by Bacher, “a Pennsylvania brewer who come to Richmond soon after the Civil War” and unsuccessfully used the vaults for laagering, or cold storage of beer. Finding the temperature too high for this part of the brewing process (perhaps because the vaults were so close to the surface), Bacher abandoned his efforts.

Photographs taken inside the vaults on the rare occasions that they have been opened show the astonishing brickwork and soaring, vaulted ceilings. 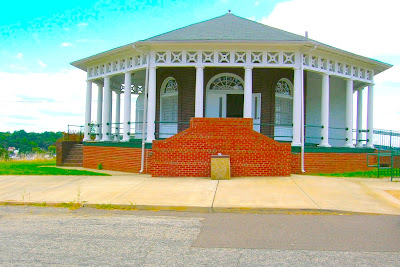 For one hundred forty years the vaults have brooded quietly and kept their dark secrets. Tropical Storm Gaston in 2004 caused a cave-in in a corner of one of the rooms, revealing a tantalizing view of the top of a brick arch and a black void beyond. The City Department of Parks quickly refilled the hole (which threatened to collapse the steps to the park house) and paved over the exposed top of the vaulted chamber below. The sound and light receded once again, and the dark and quiet resumed their dominion over the Chimbarazo beer vaults.

I have some questions with the story on the beer vaults:

2. If the "Spring" is the same one that exists on the side of the hill by the current Dog Park, then the Park House stairs as shown on the diagram are on the wrong side of the building.

So, were the stairs to the Park House originally on the OTHER side of the building, as shown in pencil on the diagram?

I'd heard about the beer vault before but I appreciate the addition information and photos. Cool story. Thanks!

Well, the idea that the "elaborate stairs" is for access the park house is far less credible than the idea they served the vaults, as there are only a couple of steps up from the existing sidewalk level to the main floor of the park house. You wouldn't need several flights of steps to ascend four feet from ground level.

It has been pointed out that the penciled outline of the park house is not in proportion to the dimensions of the vaults, meaning it is over-scale, which might explain the discrepancy of position of the "corner" collapse.

The use of the term "corner" was from observation of the brickwork that was exposed before the collapse was repaired and the resulting hole filled and paved over.

There are obviously two hands at work on the plan of the vaults: those drawing in ink and those drawing in pencil. The "elaborate stairs" are unnecessarily elaborate to furnish access to the floor of the vault, which isn't that far underground as to warrant several flights of steps and landings (unless you wanted a particularly gentle ascent from the vault floor to ground level, which is, come to think of it, consistent with carrying cases of beer).

The park house as noted above is disproportionate, so perhaps it is the case that the stairs were unbuilt or were exaggerated in the pencil part of the sketch.

You only have to look at the switchback road from the valley floor (and the spring that may have been placed for horses on the ascent) to know that getting up to the level of Church Hill proper from Fulton wasn't an easy task with horse-drawn transportation. Having finally got to the top of the hill, you would hardly want to descend part of the hill again to get into your beer vault, especially with a heavy load. They may call it light beer, but there is no such thing as lightweight beer.

The park house was obviously placed in that spot to take advantage of the view to the east across the Fulton valley. It may be that the construction of the park house meant demolition of the access to the vaults, be they the "elaborate stair" or something else a little less complicated.

It would be interesting to drag Parks and Recreation into this and ask what, if any, access still exists to the vaults, is any access buried in the yard of the park house, or is there some access from the basement level of the building. There seem to be two doors to the basement level: one that might be functional and the other that is closed with a heavy steel beam bolted across the doorway.

Yes, by rough scaling, I’d say that the “Park House” drawn in pencil is shown about twice it’s actual size. I had missed that little detail. The pencil sketch shows an inside dimension of 100 feet, plus another 15 feet, which I guess would be the porch-patio? I think the Park House is actually only about 50 feet edge-to-edge.

Maybe the pencil sketch was done when they were drawing up the plans for the Park House? Maybe it was originally going to be much larger, and the access was going to be from the “Road Leading to Tunnel” side, which is a rather steep grade, and would have required the “elaborate stairs” shown on the sketch to get up to the main floor level. Eventually it was decided to build a smaller Park House, and access it more at-grade, from the Park side, where the stairs are now located?

Very interesting. Thanks for posting the info. I love this stuff.

I'm kind of interested in the statement, "a cave-in in a corner of one of the rooms, revealing a tantalizing view of the top of a brick arch and a black void beyond." Is there amother chamber beyond what was previously described?

Regarding chambers, if you look at the plan you'll see the vaults are divided into several different "chambers" or rooms...

There would be no need to bring beer to the top of the hill. Roads rail and river are all easily accessed to the south if the entrance was on the side of the hill as shown. The "elaborate stairs" at the bottom of the hill probably were more of a loading dock (maybe ramps). They would not of transported anything that heavy down stairs.

Fascinating stuff. This is so...Richmond, to have just not one but two of these slumbering beer vaults --the other being the old Yuengling tunnels smack dab in the middle of the Rocketts development, awaIting their day in the sun. Can I hear brew pub? And if the city could be persuaded, um, well, you could use the park house to descend into the tunnels as some kind of attraction. But my guess is OSHA and ADA and maybe CHiPs would frown on such.

I just saw the on Church Hill People's News.

It's almost too fantastic to believe. To think there are two historic gems buried beneath this park (the other one being the collapsed train tunnel). This one would be far easier to excavate. Imagine putting in an underground speakeasy there.