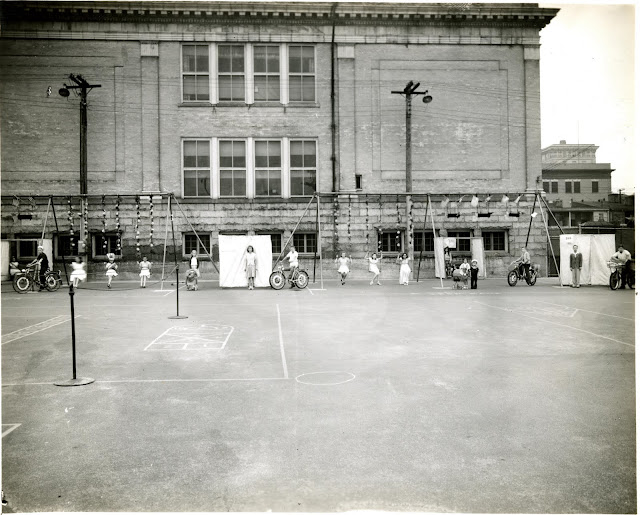 Madison Playground, 1940s
I love the dress up this kids (now probably in their late 70s/early 80s)
are wearing. And look how they decorate their bikes.
Image courtesy Richmond Parks and Recreation.
For Much Larger View, Click on Image Once, then Click Again
There's a great online resource created and maintained by the Richmond Public Schools Board entitled "Richmond Public Schools: A Mini History: Bits & Pieces" - It lists all known, past and present, Richmond Public Schools.

They describe the index of schools as such: "Much of the history of the Richmond Public Schools was recorded in the context of a segregated society, and the reader should readily discern between pre- and post-desegregation observations.  The terms “black,” “colored,” “Negro,” and “white” in this booklet should not be considered offensive as they have been used according to the custom of the particular period.  Since 1962, the division has omitted such racial designations from its reports and publications."
Below is their entry for Madison [Elementary] School:
Posted by Shockoe Examiner Staff - see bottom of blog entry for the specific author.

I went to that school the last year it was open. 1968 I think. The play ground looked exactly the same as it did in the above photo.

I attended Madison School about 1958-1960, second, & third grades when Mrs. Jones was principal. I lived on Main Street at the corner of Cherry Street and walked to school each day. Crossing Belvedere Hwy. was dangerous. We had no crossing guards. We passed by the Wonder Bread factory each day. The aromas were wonderful. Once a year we did a class trip to the factory and received a tiny loaf of bread. I remember being on the playground and seeing the horse drawn milk cart carrying the days delivery. The playground was blacktop and very destructive to my black and white saddle shoes.

As an adult in the 198o's I finally met 1 other person who went to Madison, she lived in Oregon Hill. I lived on Grace St at Laurel St when I started school at age 5. She was working at a local bank and I went to work there. One day we discovered that we had both gone to Madison and never came across anyone else that had. I had Mrs Gordon for junior primary (kindergarden then) the first year and then had her again the next year for JP 2 ( first grade ) for half a year until we moved to Montrose Hghts in the east end of Richmond and attended another school that has closed down also, Robert Fulton Elementry. We walked down Laurel St ,thru Monroe park across Main ST and crossed Bellvedere at Cary St.

I attended Madison Elementary School in 1952- grade 5. I lived on 216 West Main Street and my Father worked at Sealtest dairy then. I used to play in Monroe Park. I would love to hear from anyone else who lived in that area. I use to walk with my father to Standard Drug Store on Broad Street.

I went to that school in 1963 to 1965. I lived on The 900 block of Grace St. I attended first and second grade there. Ms Clift was my first grade teacher and Ms Jeter was my second grade teacher. I walked through Monroe Park to get there. Great memories!

I attended Madison in 1966, 6 grade, my teacher was Ms Croftin, I lived on Soring St beside Holywood cemetery

My name was Marylou Holmes