People who regularly travel through Richmond on I-95 must wonder about two buildings that stand close beside the highway, which seems to carefully thread its way between the two.  On the south, Sixth Mount Zion Baptist Church practically overhangs the interstate, while on the north side of the road the derelict St. Luke’s Building is an inexplicable survivor of its otherwise destroyed neighborhood. 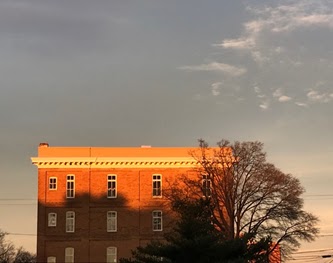 Sixth Mount Zion not only survived but has thrived despite the assault of what was then called the Richmond - Petersburg Turnpike which misses the church by a few feet, leaving it defiantly on the brink of a cement cliff above the interstate traffic.  In contrast, the St. Luke Building has languished for decades beside the same concrete ditch that almost consumed it.
Many neighborhoods of Richmond that were veritable trash-blown deserts and impassive industrial buildings have become attractive for renovators and innovators.  This was never so true as the effort to revive the part of Jackson Ward north of I-95.  It included Maggie Walker’s St. Luke building at 902 St. James Street, and a recent story in the Richmond Times-Dispatch describes a new effort to renovate the building.
….so it would probably be a good time to take a look inside before renovations and the conversion to apartments forever change the structure Charles Russell redesigned and Maggie Walker once knew. 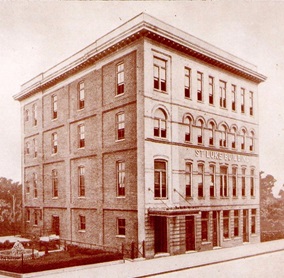 The original structure of the St. Luke’s building was a three-story office structure designed by John H. White and built in 1903.  After Maggie Walker took the helm of the International Order of St. Luke, the organization moved its headquarters from Baltimore to Richmond.  The original building was quickly determined to be too small.  Richmond’s first black professional architect, Charles Russell, was commissioned to expand and refurbish the existing St. Luke’s Hall structure for Mrs. Walker, adding another floor and expanding the front facade by one bay at the cost of $98,000.  Russell worked with Mrs. Walker earlier, designing the (now demolished) St. Luke Penny Savings Bank for her organization in 1910, and eventually making substantial modifications to Mrs. Walker’s own home in the 1920s. 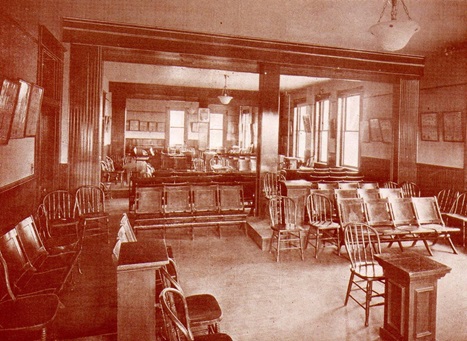 The resulting four-story structure Russell designed for the Order had offices on the top floor, meeting rooms on the third floor, an auditorium on the second-floor seating 800 and the offices of the St. Luke Herald newspaper on the ground floor.  A meeting room with adjustable room dividers accommodated various size meetings and organizations.  In an era where radio was a luxury and television unknown, social and fraternal organizations flourished, and Jackson Ward was home to several important multi-purpose buildings.  The internal flexibility of the spaces in the St. Luke building reflect the demands of that golden age of clubs and organizations.
The Independent Order of St. Luke staggered on in a much-reduced form until the 1980s, finally vacating their building on St. John’s Street above the highway.  It sat vacant for decades, watching the decline of the blocks around it as the highway strangled that part of Jackson Ward. 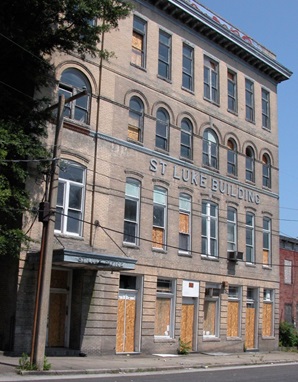 The National Register of HistoricPlaces gives an interesting look at the St. Luke Building as it appeared in 1981, almost fifty years after the death of the charismatic Maggie Walker.  The document notes the interior of the building is “remarkably well preserved” and indeed, photographs that accompany the National Register documents show the interior furnished in much the same way as it appeared in the 1917 publication.  “The office of Maggie Walker, longtime head of the Order, is preserved as it was at the time of her death in 1934.  It retains her desk, adding machine, and bookcases.”  Today, the office is sadly stripped, and it can only be hoped that the furnishings were saved. The St. Luke’s Building has been in an accelerated state of decline since the 1981 survey. 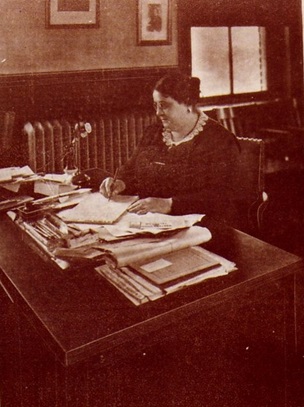 This is a photo circa 1917, showing Maggie Walker at her desk in the St. Luke’s building.  Instead of urban prairies and the yawning concrete moat of the Interstate, Mrs. Walker’s westward-facing windows would have looked out onto the roofs of block after block of tree-shaded Jackson Ward streets that stretched without interruption toward Broad Street.  In this photo of her office, note the radiator and window behind Mrs. Walker. 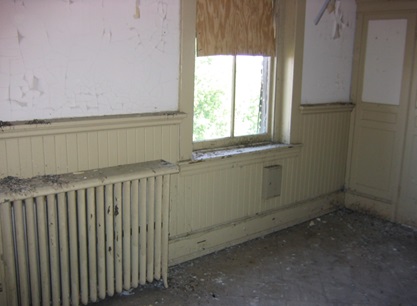 The same scene as it appears today.  Any furnishings or fixtures seen in the photo of Mrs. Walker’s office and that were apparently still in place in the early 1980s are now long gone. 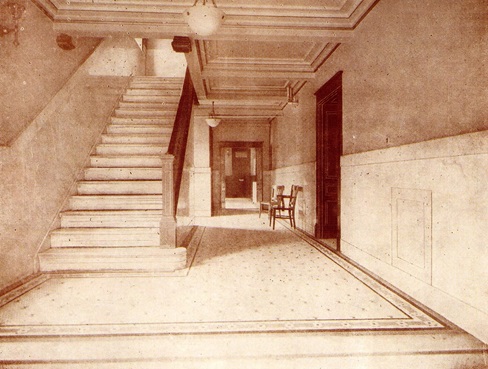 Shown above is the entry lobby and stairs of the St. Luke building.  Among the missing fixtures at the site is this large bronze plaque that was once mounted on the wall to the right.  It proudly listed twenty-six individuals from up and down the East Coast, who were instrumental in the funding, design, and construction of the building.  Surely, the unveiling of this plaque must have been a moment of swelling pride for the people of Jackson Ward when they gathered with Mrs. Walker and her staff and neighbors. 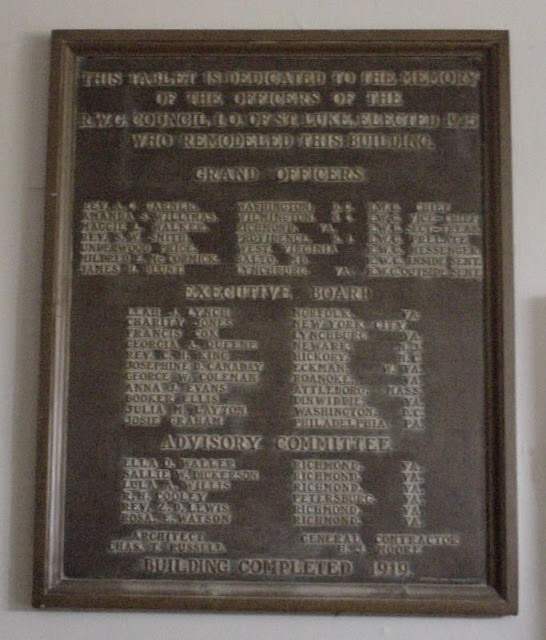 The now-vanished plaque lists Charles Russell as architect and H.J. Moore as the general contractor, and hopefully this marker, this important part of Richmond history can be either found or reproduced. 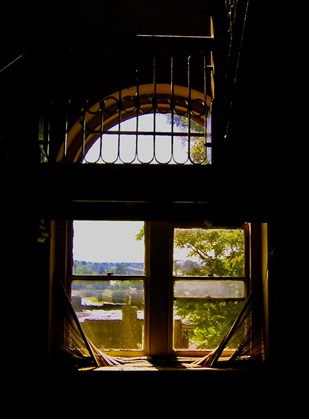 Traces of grandeur remain of the building that housed the International Order of St. Luke and its thriving headquarters staff, like what was once a beautifully colored pressed tin ceiling in the stairwell, or the large vault that once kept the books and valuables of the organization. 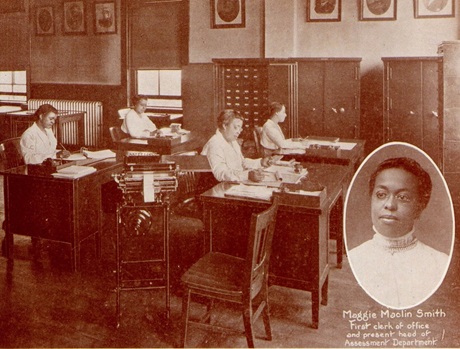 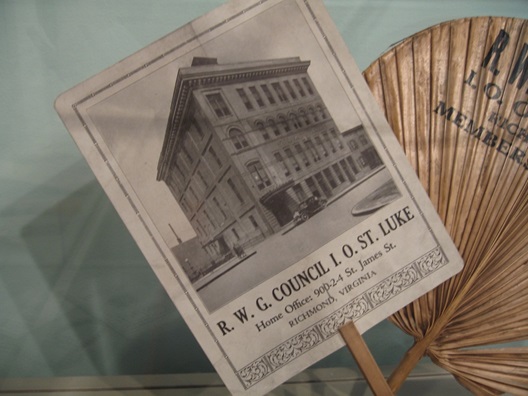 In 2009, students from the college of William & Mary made a remarkable discovery of a large group of records in the attic of the St. Luke’s Building.  This recovery of the documentation of much of Maggie Walker’s organization, its scope and significance, only underscores the importance of the building to African-American history in general and the history of Richmond in particular.  You can read the story here about their discovery.
This is an astonishing discovery which ranks with the recovery of the Southern Aid Insurance Company archives from a Jackson Ward dumpster 20 years ago.  Both sets of records give an unprecedented look into black business and society in Richmond during the same years around 1900 that saw Mrs. Walker’s organization flourish.
Hopefully, the renovation of Maggie Walker’s St. Luke Building will not only set a high standard for renewal in North Jackson Ward, but will also be sensitive to the remarkable history that took place within its walls.