The Jefferson Davis Memorial Chapel: The Shockoe Examiner responds to a reader.

[We think it is time to re-post this blog entry.] 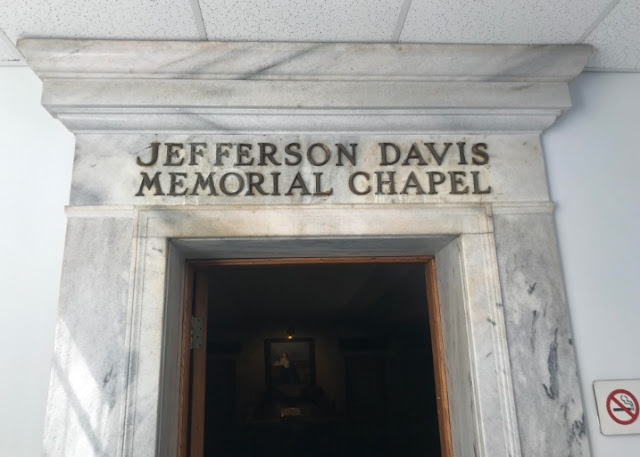 First of all, thank you Dr. Lunsford for reading the Shockoe Examiner and, more importantly, responding to the post I wrote.  We who work on this blog live for some reply from our reading public, and we appreciate your time and your thoughts.

A couple of corrections to your comment: please recall that the Jefferson Davis Memorial Chapel was created in 1960, not in 1941, and had you visited the space you would know there is no “UDC insignia” displayed inside.  The West Hospital is a Commonwealth of Virginia facility and supported by Virginia taxpayers, unlike Hollywood Cemetery.

Your obvious knowledge of the Cabell family and their Confederate background is interesting but is not really germane in a discussion of a State-funded space with the name JEFFERSON DAVIS in large letters above the marble entry.  One is a genealogical connection, the other a 1960s flareup of the same Lost Cause sentimentality that has affected this city for 150 years.

Perhaps it would be a useful exercise to put yourself in the place of African American families who, once they were allowed in the formerly segregated West Hospital, found themselves in need of the spiritual comfort that a private chapel in the hospital might afford.  Can you picture attempting to pray for the recovery of their loved ones in a place of worship that is not only named for, but that lavishly praises the same man who would have them and their parents and their children as slaves?  I cannot imagine what a black person would think about his or her tax dollars supporting and maintaining this artifact for sixty years. In addition, that astonishingly fawning plaque on the back wall of the chapel extolling the virtues of Jefferson Davis (“a gallant figure for youth to emulate”) would be a laughingstock if it were visible in some more public place.

Lest you think that I am some kind of wretched Yankee import who would impugn the reputation of President Davis, I am the descendant of a Confederate officer of some renown and take pride in his efforts to defend his home state of Virginia in what he felt was a just cause.  If I was like him and been born in 1838, I might have thought that cause was just, too.  However, that was then, and this is now.  I live in the Richmond of today and am sick and tired of the perpetuation of the same wounds that have crippled this city for so very long.

Unlike the gloomy chapel on the 17th floor, the modern V.C.U. Medical Center chapel is an appropriate and comforting space and staffed with friendly volunteers.  Let’s just lock the door of the Jefferson Davis Memorial Chapel and consign it to where it belongs: the interesting if hugely flawed history of mid-twentieth century culture in the American South.

Well you have hit on an issue which has bugged and obsessed.me for years.

I have been a patient in West Hosputal for seven years. One day, being a nosey Richmonder, I went up the elevator rather than down after my appoint. On 17 I found the chapel and was dismayed but not surprised. I have been a Richmonder for 55 years and know that if one looks it's easy to find hidden examples of the city's fetish for losers and traitors.

The JDMC is a tawdry wreck and the bronze cake plate on the back wall contains the most vile superlatives of a dishonorable mass-murder accomplice I have ever read.

This crap needs to go. I have written a polite, well-reasoned letter to President Rao which i will deliver on January 5 (my birthday WTF). I will ask him to remove what I describe a a "stain" on VCUs reputation as a hospital of last resort for the most needy in the community.I will give the President a reasonable time to respond then failing success will consider next steps.

The removal of this out of place outrage should be a relatively easy task, at least as compared to the removal of the public affront at Monument and Davis.

Can I count on your help? Let's achieve something. We need a victory, even a small one.