The location is on the very edge of the Highland Park plateau, on an overgrown lot on grandly named Fifth Avenue.  Once there was a commanding vista from here across the upper Shockoe Valley, but today the trees come right up to the house and choke out the view.  Salamanders scoot through tangled rebar and across the hot bricks of broken walls parallel to the sidewalk, hinting at what was once a sizable building attached to a ruinous Highland Park home.  When the hot air stirs the kudzu vines around it, the old house that is still standing on the lot gives off a musty stink of wet plaster, long neglect, lush mold, and dread.  And yet for all its ruin and decay, this place was the birthplace of thousands of people – all Richmonders, whether they knew it or not.  This wreckage is the last remains of the former Evangeline Booth Home and Hospital for unwed mothers.

The house at 2701 Fifth Avenue which was the original Booth Home and is ironically the last of the facility still standing. From the Salvation Army website,
“Central History Command – Our History in RVA”

The genesis in 1920 of what was to become known simply as the Booth Home was in a philanthropic Richmond organization called the Interdenominational Welfare League.  It was formed to establish a home for women and girls, who, as it was delicately worded, “have for any reason become misfits in the social structure of life.”  An agreement was reached that the home would be put under the auspices of the Salvation Army and join a network of similar facilities, usually named for the first woman to head the Salvation Army, Evangeline Booth (1865-1950).  There was a Booth Home and Hospital in most major American cities, serving unwed mothers and their children. 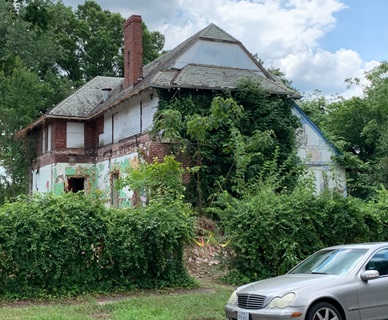 The Salvation Army acquired the house at 2710 Fifth Avenue and the Booth Home and Hospital opened its doors January 11, 1923.  The fact the facility resembled a “cozy, comfortable home,” was consistent with a nurturing approach that girls found comforting. One board member explainined to a reporter, “Just imagine, if you can, a real home for women and girls….a home with an open fire-place, tasteful pictures, lovely soft curtains, and warm rugs.  Imagine a home where a gentle spirit of kindness hovers, where one is spoken to affectionally and made to really feel that there are those who understand and want to help.”  Aside from its apparently well-appointed interior, the  building displays the faux half-timbered gables and glazed headers of the Tudor Revival, below its oddly clipped roofline.  Although not as common as Queen Anne and Colonial Revival, the faux Tudor look was nevertheless popular among the substantial homes of Highland Park. 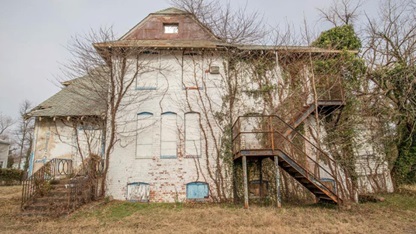 The south side of the former Booth Home,
shrouded in vines and trees, in 2014.

Throughout its fifty-year history, the  Booth Home depended on help from various Richmond philanthropic organizations, and as early as 1924 volunteers from the Garden Club of Virginia were out on the one-acre property, installing now long-vanished  gardens, paths, and flowers.  Bake sales, concerts, and “Donation Days” kept the home going, even though the depths of the Great Depression.  One group raised money to buy furnishings, another medical equipment.

Young women generally came to live in the Fifth Avenue home for several months, during which time they received training with sewing, cooking and other useful domestic skills.  At some point the issue of adoption or leaving the Booth Home was decided, and invariably there was a new girl in need of help and comfort to take the place of those that left.   Hundreds of these young women were helped each year, but many more were turned away. 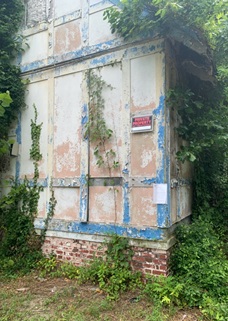 A detail of the “half-timbered” decoration
of the original Booth Home.

In October 1930, on the brink of the Great Depression, there was terrific excitement in Highland Park.  The silent movie stars Vilma Banky and Rod LaRocque were appearing in a play, “Cherries Are Ripe,” at the Mosque (today’s Altria Theater).  As publicity for the Richmond Community Fund (the forerunner of the United Way), Banky and LaRoque visited the Booth Home. Although largely forgotten today, the actors (who were husband and wife) were once quite famous, each having a star on the Hollywood Walk of Fame, and their interest in the Booth Home was consistent with the their philanthropic work in Los Angeles.  Described as “Charming, human, enthusiastic,” Banky and LaRocque delighted the staff of the Booth Home and “frolicked” with the babies in the nursery. 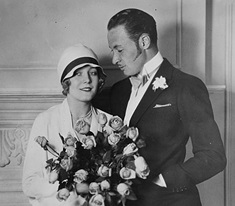 By the 1940s, it was becoming painfully obvious was that the Booth Home facilities were inadequate for the mission of helping young women, and demand far surpassed the Home’s ability to serve the Richmond area.  Newspaper articles throughout the decade stressed the inadequacies of the building at 2701 Fifth Avenue.  In a 1943 article, it was noted that dozens of girls had been turned away because of overcrowding.  “The hospital capacity is 16, but by setting up cots, it has housed as many as 19 girls,” commented one Richmond newspaper.  In October 1947 there were 23 young women and 11 babies living in the crowded house on Fifth Avenue. A 1948 article about the city’s various charitable organizations flatly stated, “One of the greatest needs of Richmond today is the proposed new modern fireproof 24-bed building for the Booth Home and Hospital.”

Through the efforts of the American Legion and other community groups, funds were raised for a brick addition to the existing facility.  A two-story brick wing built in 1952 added 30 beds, a laboratory and delivery room to the Booth Home.  Various local garden clubs and fraternal organizations raised money to furnish and equip the new building, as well as revamp the existing house as a dormitory for pregnant women. 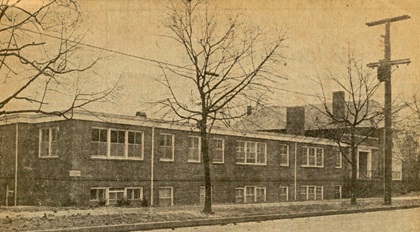 The Booth Home and Hospital, showing the brick wing added in 1952.  Note the original house on the right.  Richmond Times-Dispatch

Over the following decades, the Booth Home and Hospital served the Richmond community, and thousands of babies were born on Fifth Avenue over 50 years.  In 1967, their busiest year, the facility helped 135 girls.  By 1972, that number was half, and rather than maternity cases, the Home was serving more runaway and homeless young women.  By the time the Booth Home reached its 50th anniversary in 1973, 4,209 young women had children at the facility, although its usefulness was quickly ending.  Societal changes such as birth control and the availability of abortion meant the mission of the Booth Home was changing and a staff member admitted, “Today, there is no waiting list.” 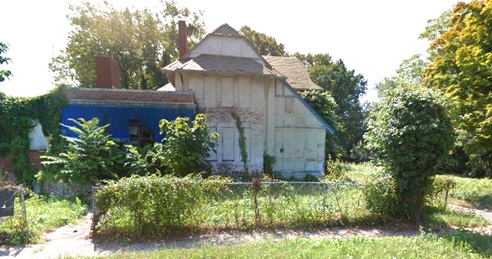 The former Booth Home as it appeared in 2014, with the blue awning from the Crawley Nursing Home still in place.  Google Earth

The Salvation Army’s operations at the Booth Home ended soon after that 1973 article, and the property on Fifth Avenue was sold to Mary Brown Crawley, a local entrepreneur whose businesses included a series of stores, a funeral home, and barbecue restaurants. The Booth Home reopened as Crawley’s Nursing Home until the facility closed in 2000.  It then stood abandoned and deteriorating for 20 years, until the partially-collapsed hospital wing was recently demolished. 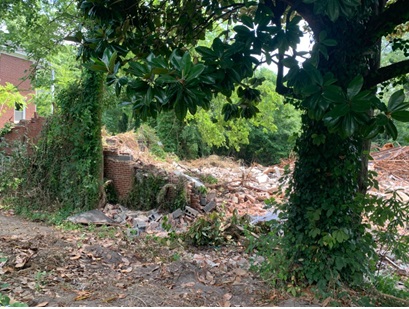 After 50 years in a building on Grace Street, the Salvation Army announced the creation of a new facility on Richmond’s North Side (ironically, not far from Fifth Avenue), to consolidate their many services, counseling and assistance for young women of all races just part of their mission today.  The story of the Booth Home and Hospital, created and operating in segregated Richmond, begs the question as to where the young black women in the same position found help and comfort.  The Crawley Nursing Home was established by and for African-Americans as the racial makeup of Highland Park changed, but there is no mention of “colored” women finding publicly-funded aid such as the Booth Home.  Further research is necessary to recover the rest of the story of this once-vital social issue that spanned races.

As of late July 2020, the debris from the hospital wing of the Booth Home is being loaded into dump trucks and taken away.  A workman on site said there are currently no plans to demolish the original house part of the complex, so for a while at least the first part of the Booth Home is the last to survive, and the musty, partly-ruinous house still exists.  This was once a place of much anguish and much joy – it is a wonder the old walls could contain the emotions in the Booth Home and still stand. Once, the light over the front door of this place was a beacon to women in trouble with nowhere else to go.  For them, this was a special place, and women all over the country who are grandmothers today may remember the house in Richmond where they received a welcome at a time they needed it the most.

Selden, thanks for turning up the tendrils of this story.