With the end of the Civil War, a series of newly freed African American communities were established around the Richmond area. Among these was Westwood, still a thriving community centered on Westwood Baptist Church and located at Patterson Avenue and Willow Lawn Drive. See the Shockoe Examiner’s account of Westwood’s remarkable history Here and a community called Ziontown, now largely destroyed by suburban sprawl along Henrico’s Ridge Road, described in Richmond Magazine two years ago.

Perhaps the least known is the African American community at Bandy Field on Three Chopt Road, founded around the same time as Ziontown and Westwood, but now completely obliterated except for its historic cemetery. The Shockoe Examiner addressed the plight of this particular cemetery in a previous post in 2019. 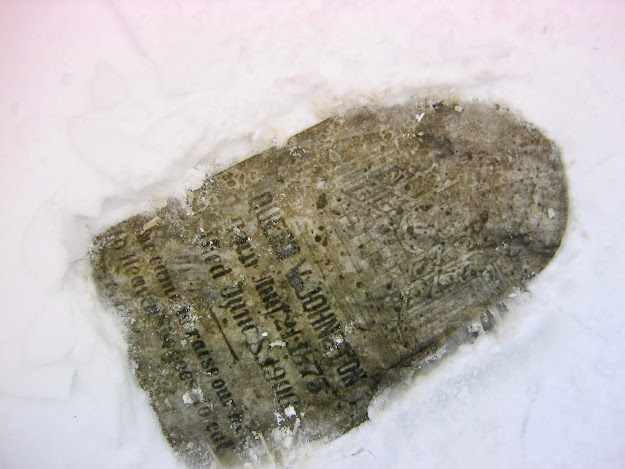 The overturned tombstone of Queen V. Johnston (1875-1900) in the Sons and Daughters of Ham cemetery.

The African American cemetery located between the University campus and Bandy Field Nature Park has received a lot of attention lately.  Research is ongoing as to exactly who is buried on the site.  There are two standing tombstones and research has demonstrated there are more graves.  A volunteer group, the Friends of the Sonsand Daughters of Ham was organized to coordinate modern research with the concerns and rights of the relatives and heirs of people buried in the cemetery.

The council hall that was the social heart of the Bandy Field community was known to have stood somewhere on the one acre property, but until its location in relation to the cemetery and property boundaries was a mystery. 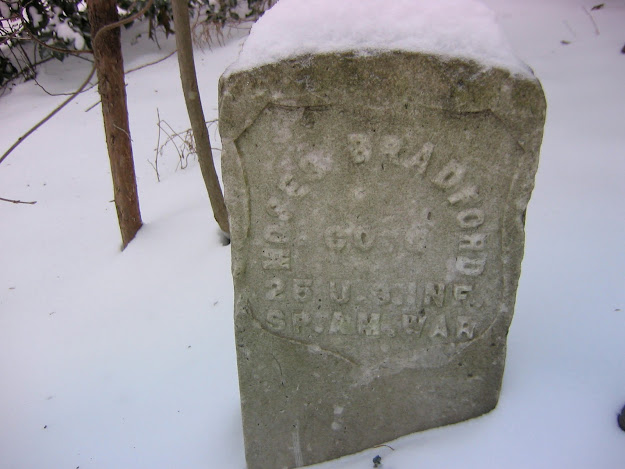 The only other surviving grave marker is that of Moses Bradford, which shows the distinctive shield design used on all government-issued tombstones for veterans of the Spanish-American War.

In April 1943, a forest fire roared through the woods of Westhampton, burning the now thickly wooded area between Bandy Field and the University of Richmond campus and in the process consuming some structures in the area.  The evidence of that day can still be seen in a line of partially burnt fence posts that run along the UR boundary in the woods. 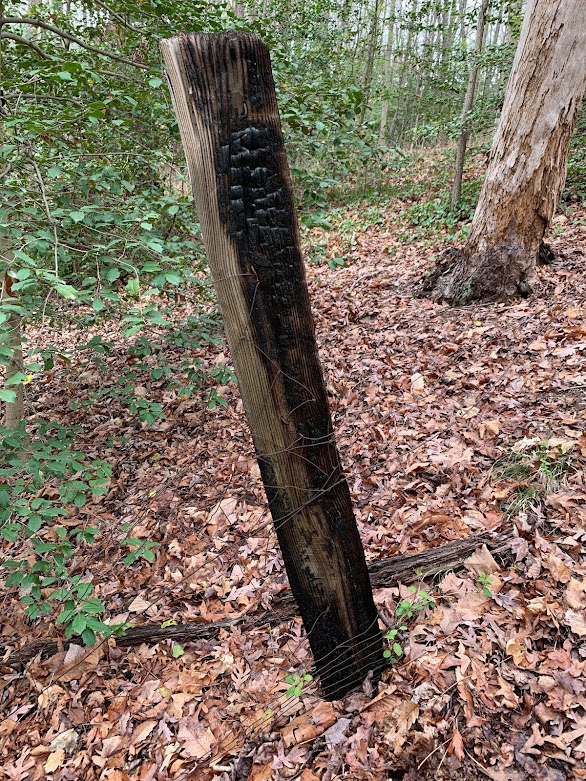 One of a line of partially-burned fence posts which have stood here since the 1943 fire.

One of the buildings consumed by the fire was the Sons and Daughters of Ham council hall at Bandy field.  At the time, a Richmond Times-Dispatch reporter drove out to the West End and took a photo of the wreckage of the still-smoldering building.  Perhaps in an attempt to be clever, this image was juxtaposed with a photo of Mrs. Louise Bradford, holding the remains of a ham burned when the forest fire consumed her smokehouse. 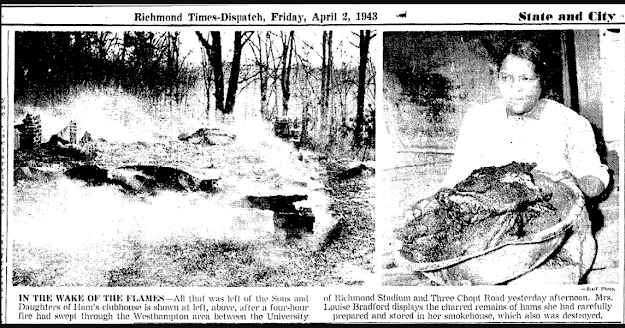 In the background of the photo of the smoking wreckage of Ham Hall, the woods have still not leafed out and in the distance, the tree line on the far side of the UR campus is dimly visible across the valley.  On the left, the falling edge of the tree covered hillside near Edgehill Road is visible.  Note also the stump of a brick chimney on the left edge of the photo and beside it, the collapsed remains of a cast-iron wood stove. 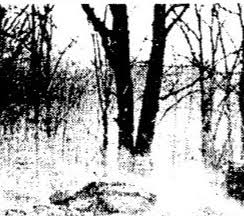 The forked tree in the distance in the 1943 photo of the smoldering wreckage. 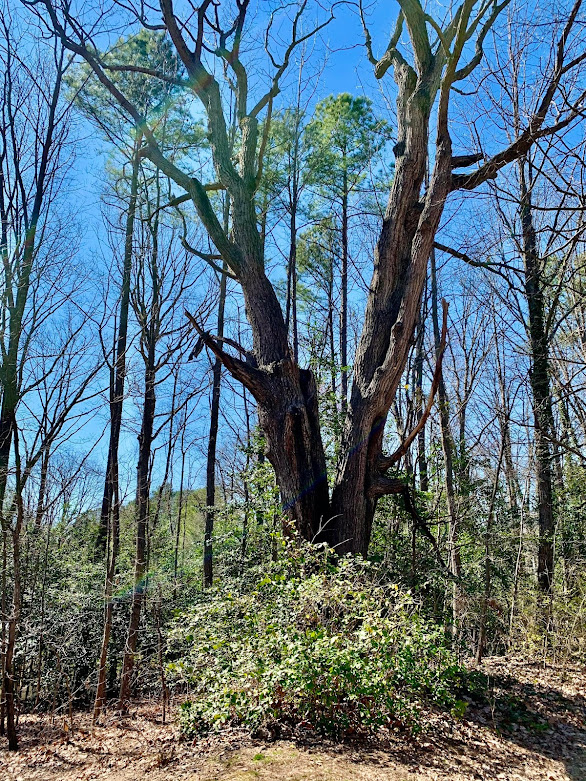 The forked tree is still alive to testify to the location of the hall used by the Sons and Daughters of Ham.  A modern photograph shows the same tree, 77 years later, still standing on the edge of the hill.

Comparing the 1943 photo and one taken today shows the tree and indicates the position of the Sons and Daughters of Ham on the site.  In addition to the testimony of the forked tree, there is a line of broken brick protruding from the ground beside the modern fence that defines the Bandy Field park area.  The bricks can be seen in approximately the position of the remains of a chimney that is visible in the 1943 image. 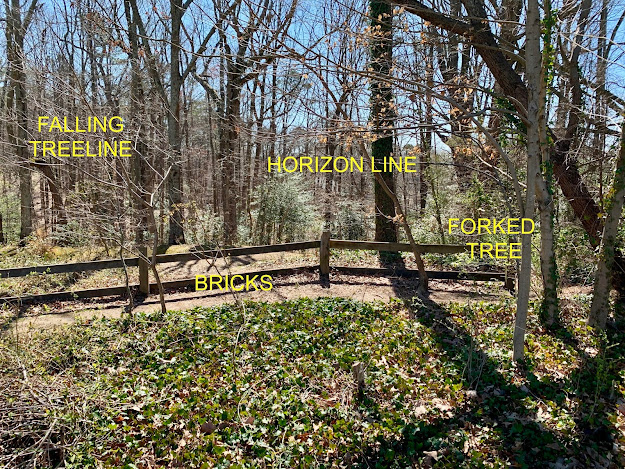 Compare this photograph with the 1943 newspaper image of the smoldering building.  The Sons and Daughters of Ham building stood in the patch of ivy in the foreground of this photograph.

There is an existing photograph of the community / fraternal hall that stood a short distance away at Ziontown.  Using that building as a model, a conjectural picture of the entire Sons and Daughters of Ham complex is possible with some certainty that the location of the structure is correct, positioned on the edge of the sunken road now known as Chandler Drive. 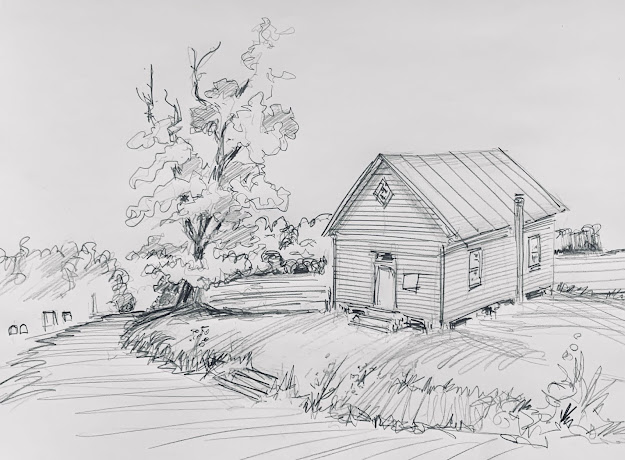 A conjectural drawing of the Council Hall of the Sons and Daughters of Ham.

The evidence of the 1943 newspaper photograph, the bricks, and the survival of the forked tree in the background all pinpoint this location of the community hall on the one-acre site.  Even a cursory examination of the area beneath the vegetation of this area may produce more information and artifacts that would further define what we know the building.  Locating the remains of any brick piers or foundation traces would at least yield the dimensions of the structure and how it was built.  Below the site, on the other side of Chandler Road, is an extensive trash pile under the leaves may also hold an enormous amount of information on the residents of Bandy Field and the heart of their community, the council hall of the Sons and Daughters of Ham.
- Selden.
Posted by Shockoe Examiner Staff - see bottom of blog entry for the specific author.