The Last Bombardment of Church Hill – 1950

It was after 9:00 at night and nobody really wanted to be down at the Blues Armory on Marshall Street. Members of the National Guard’s 176th Regimental Infantry Combat Team were drilling that October evening, and no doubt most of them wondered what the new year would bring. The Korean War was going badly that winter and many of these reserve soldiers may have expected to be called up in 1951. The two regular Army instructors overseeing the drill were probably delighted to be conducting training as far away from Korea as they could get.

The two instructors were brought in to conduct the weekly drills on the M20 recoilless rifle, a weapon designed to attack tanks and fortifications and that was widely used in the Korean war. Although termed a “rifle,” this weapon was more of a launcher, which fired a high-explosive shell more than two miles on the point of a rocket. When it went off, there was the fierce backblast characteristic of all rocket projectiles and the Guardsmen were warned there was a 75-foot danger zone behind the M20 inside of which personnel could be easily injured or killed, so always keep that area clear. 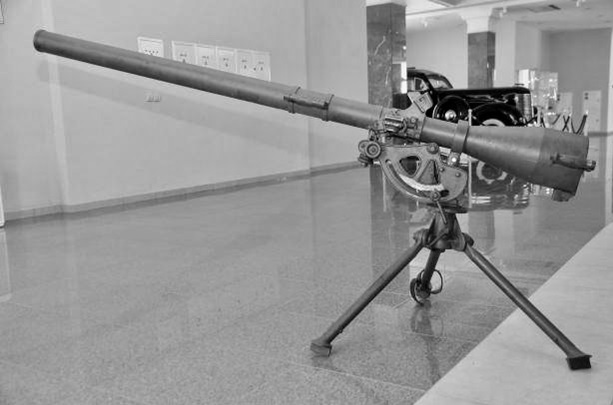 This weapon was generally served by a seven-man crew, three of which were designated as ammunition carriers. All seven were assigned a task in the deployment and use of the M20, and the National Guardsmen switched these roles over and over, simulating loading, unloading, sighting and firing the M20 with inert practice shells in a room on the second floor of the Blues Armory. “We aimed it first, towards the room where some of the officers were meeting,” recalled one Guardsman later, “But someone laughed and said it wasn’t polite to aim at the staff, even if the shell was a dummy.”

The Technical Manual for the M20 describes the sequence of the firing of the weapon, using the numbers assigned each member of the gun crew according to his task. Repetition meant efficiency and routine ensured the soldiers would perform the necessary operations even under the stress of combat. The National Guardsmen had been over this and over this sequence under the eyes of the Army instructors until they could practically chant the procedure as they went through the drill:

No. 4 draws the type of ammunition designated from its container and passes it to No. 2. No 2 inserts it in the chamber and seats the round firmly. He then closes the breech and taps the gunner’s hand to indicate that the gun is ready to fire. No. 1 lays the gun on the designated target, takes the correct sight picture, and waits for the tap from No. 2 indicating the gun is ready to fire. On receipt of the tap he rotates the safety and depresses the trigger…

There was a terrific explosion in the room with the recoilless rifle, and for a split second, the whole place was illuminated in the white flash of the rocket round going off. The room was instantly engulfed in the smoke from the exhaust flame from the back of the gun. The gun crew still in the room with the M20 had a momentary glimpse of their fellow soldiers shouting soundlessly and clutching their hands over their now-ringing ears before the plaster ceiling came down and covered them all in thick white dust. 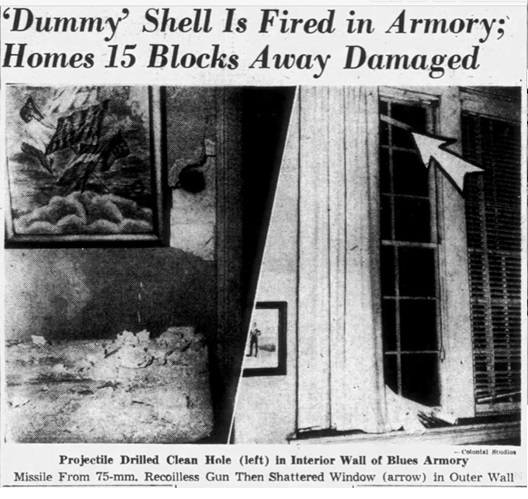 In the armory there were more than a hundred panes of glass broken in an instant, sending a cascade of glass, plaster and Venetian blinds out into Marshall Street. The Guardsmen and their Army instructors stumbled from the room, coughing in the thick smoke and dust and crunching around in the broken glass and plaster bits. Remarkably, only two people were hurt by the explosion: one cut by flying glass and another hospitalized because of the ringing in his ears. 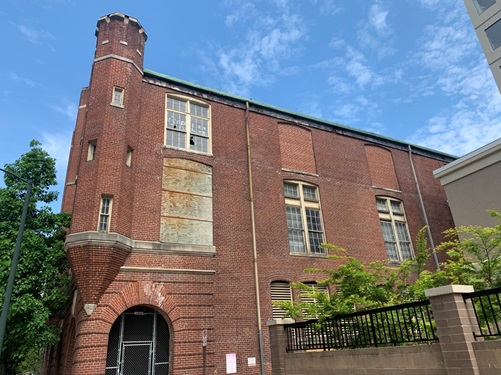 The east side of Richmond’s Blues Armory. The shell fired inadvertently on the second floor went through the upper part of the middle window in this picture.

Richmond telephone switchboards lit up with calls for help, and authorities sent twenty-five policemen, five fire trucks and an ambulance toward the Blues Armory, where plaster dust and smoke continued to waft out of the smashed windows. While the Guardsmen and their instructors were sorted out and dusted off everybody was asking the same question – what happened? Firemen examining the room where the M20 went off found a neat, 75mm hole cut through the four-inch solid wall and following its path, saw the rocket projectile had gone through the armory and out into the dark through one of the east-facing windows, and toward the heart of downtown Richmond.

The shell left the Blues Armory traveling down Marshall Street at a height of about thirty feet and a speed of roughly 1,000 feet per second. In a flash it had reached Ninth and Marshall, where a late meeting of the Richmond School Board was first interrupted and abruptly ended by an inexplicable and frightening sound outside the window. The rocket continued east past the Medical College of Virginia hospital. One soldier later mused that had the M20 been turned just an inch or two to the right, the projectile might have hit the building. The rocket left downtown and flew over the crusty old Richmond jail, over the Jefferson School and down the length of the now-demolished Marshall StreetViaduct, across Shockoe Valley, and into Church Hill. 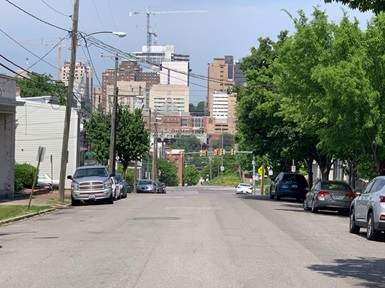 Downtown Richmond as seen from the 2200 block of East Marshall Street.

The projectile came down 1.3 miles away from the Blues Armory in the north side of the 2200 block of East Marshall. It hit the house at 2214, cutting first a foot-long gash in the roof and emerged through a porch support. 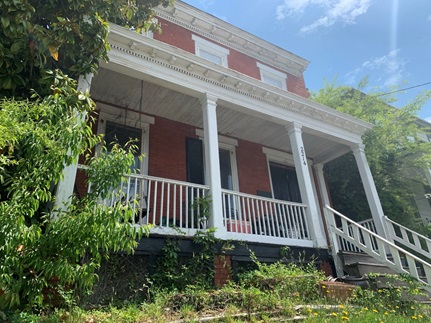 2214 East Marshall Street, the first house hit by the shell from the Blues Armory.

Next door at 2216, the home of Mrs. K. M. Ford, the shell went through a glider cushion and into the front porch floor. Mrs. Ford said, “It shook the house. At first I thought some automobiles had crashed in the street.” Nine-month-old Brenda Lee King slept through the entire episode in a first-floor bedroom, oblivious to the sound of the shell that sliced cleanly through her grandmother’s house several feet from her crib. 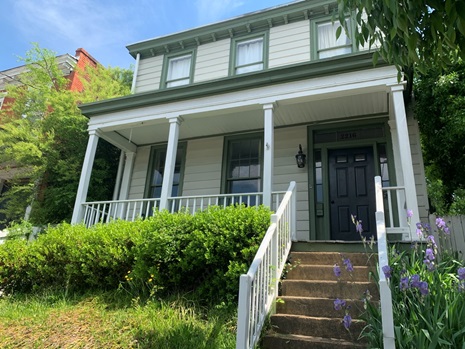 The shell ricocheted under the porch of Mrs. E. B. White’s house at 2218 East Marshall, tearing out wooden supports and emerged again with an upward trajectory, cutting down a porch swing at W. H. Cash’s house at 2220 and splintering a post. Mrs. Cash later said, “I went to the front door and looked out but didn’t see anything but a lot of smoke so I came back in.” Spent, the missile rolled down East Marshall Street and came to a stop under a Chevrolet sedan parked at the curb. 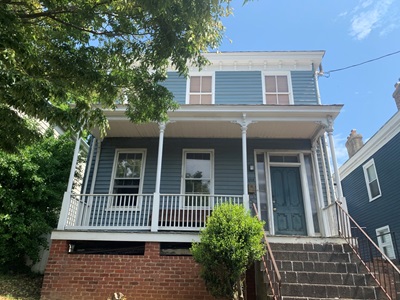 Once the situation was explained, residents of Church Hill who gathered to see what was going on in East Marshall understandably gave both the shell and the Chevrolet a wide berth, not knowing when both might explode. The police finally appeared and guarded the scene until the arrival of members of the National Guard, who sheepishly retrieved the shell from under the car and drove it back to the armory from whence it came. 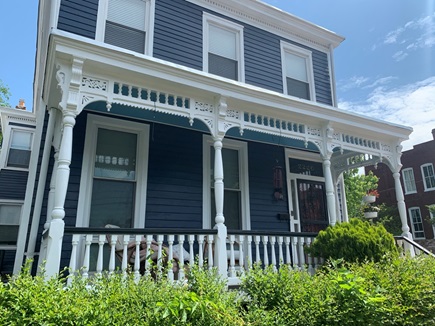 There followed a flurry of finger-pointing and an exchange of blame between the Army and the National Guard as to who was responsible. There were three types of ammunition for the M20: high explosive, “inert” rounds which went off but held no explosive in the projectile, and “dummy” rounds, which were solely for training. The soldiers at the Blues thought they had dummy rounds.  Vague labeling on the cases and the rounds themselves led to confusion about what they were issued for training, resulting in loading a live shell with an inert warhead. Eventually Governor John S. Battle came to the defense of the Virginia National Guard, saying they had been issued mislabeled ammunition by the Army. The two Army instructors who were conducting the training were given letters of reprimand.

Two months later the Richmond Times-Dispatch put the matter to rest with an editorial helpfully titled, “Mark Those Shells Clearly.” The editorial claimed the issue was a valuable lesson for the Army and should be used to revise ammunition labeling before some more serious accident happened.

The ironic phrasing of the label on that ammunition at the Blues Armory seemed to tell the entire story of what will hopefully be the last artillery bombardment of Richmond’s Church Hill neighborhood: “Cartridge, TP, M-309 (T38) w/fuse, dummy.”