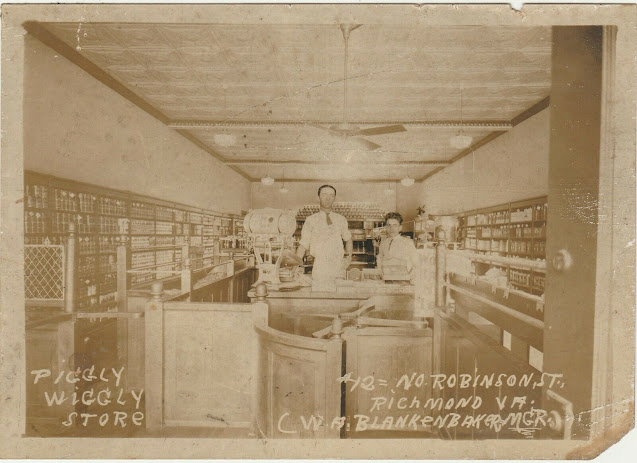 Another interesting eBay image I downloaded in 2021. Piggly Wiggly's first store in Richmond stood at 116 W. Broad when they opened in 1918. This store seen in this image stood on 12 N. Robinson St. and the image dates ca. 1928.
Piggly Wiggly, according to Wikipedia, was the first self-service grocery store and was founded in 1916 in Arkansas. At the time of its founding, grocery stores did not allow customers to gather their own goods. Instead, a customer would give a list of items to a clerk, who would then go through the store, gathering them. Piggly Wiggly introduced the innovation of allowing customers to go through the store, gathering their goods, thus cutting costs and lowering prices. Soon they issued franchises to hundreds of grocery retailers and by their peak in 1932 they had over 2,000 Piggly Wiggly stores located mostly in the south.
Using Ancestry.com and its many records (including Richmond city directories) I learned that this Piggly Wiggly stood at 12 N. Robinson Street from 1922 until 1932. Mr. Blankenbaker in the image is Wilmer Allan Blankenbaker, Sr. (1909-1994). He was first listed in the Richmond city directory in 1928 as manager of Piggly Wiggly. He was 19 years old. It lists his residence at 2521 Stuart Ave. (Just a few blocks from the Piggly Wiggly location on N. Robinson.) In 1929, he is listed in the city directory as an employee of the Richmond News-Leader. So it looks like he was manager for only about a year. He then disappears from the directory until 1938 when he is listed as a pastor at the Oakland Methodist Church here in Richmond. In the 1930 census, he is listed as living with his uncle at 2521 Stuart Ave. In that year he is listed as a bookkeeper. Records show that when he died in 1994 a service was held at Centenary United Methodist Church, 411 East Grace Street, here in Richmond. He was buried in Arlington, Virginia. I wonder who the kid in the picture is? If you follow this link you can learn more about Blankenbaker in this profile of Virginia United Methodist Church pasters.

Here's another Piggly Wiggly in Richmond located on the 100 block of West Broad ca. early 1920s. This image is from Broad Street Old and Historic District, Richmond, Virginia.
- Ray