Among the many wonderful resources found in Google Books is their collection of LIFE magazine issues.  LIFE's May 26, 1941 issue featured a four page article about several Virginia artists participating in art show at the Virginia Museum of Fine Arts. The show was entitled "The Eighth Exhibition of the Work of Virginia Artists" and it ran from April 12 to May 25, 1941. Here's a link to the magazine issue at Google Books.  Among the many neat images is one of art students from Richmond Professional Institute sketching the J.E.B. Stuart monument in Stuart Circle on Monument Avenue. RPI was the forerunner to VCU on the Monroe Park campus.  Later this week I'll try to provide some links and more information about the individual artists mentioned in this LIFE magazine article. - Ray.

Here are the original images from the magazine as seen on Google Books. I transcribed the text for easier (and search-able) reading: 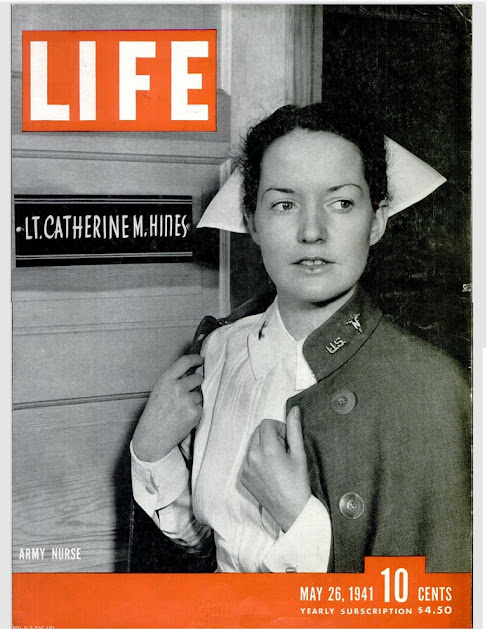 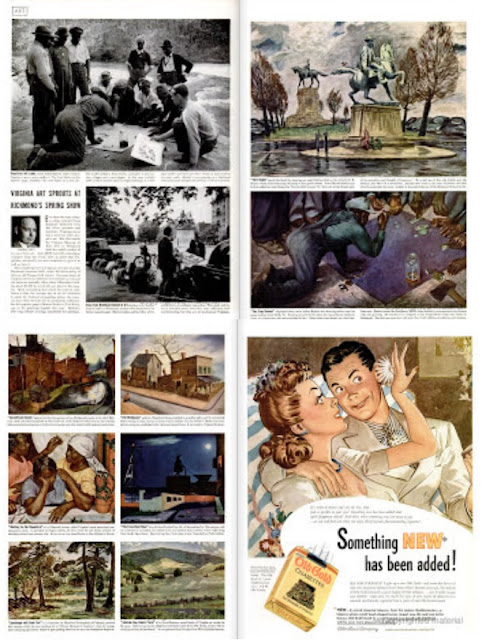 Showing the layout of the article on Virginia artists. 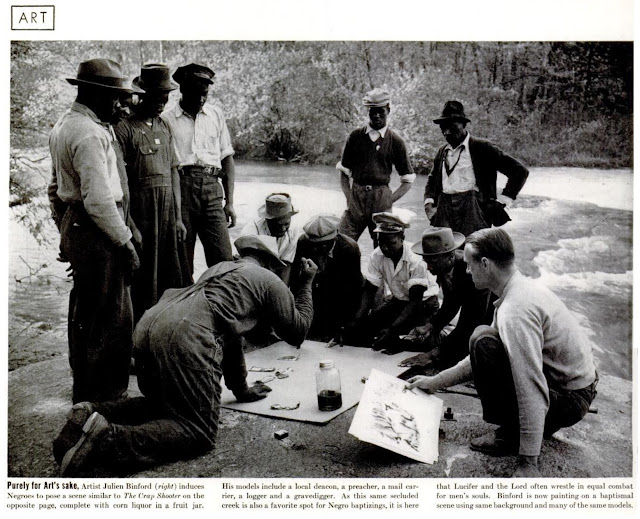 Purely for Art’s sake. Artist Julien Binford (right) induces Negroes to pose a scene similar to The Crap Shooter on the opposite page, complete with corn liquor in a fruit jar. His modes include a local deacon, a preacher, a mail carrier, a logger and a gravedigger. As this same secluded creek is also a favorite spot for Negro baptizings, it is here that Lucifer and the Lord often wrestle in equal combat for men’s souls. Binford is now painting on a baptismal scene using same background and many of the same models. 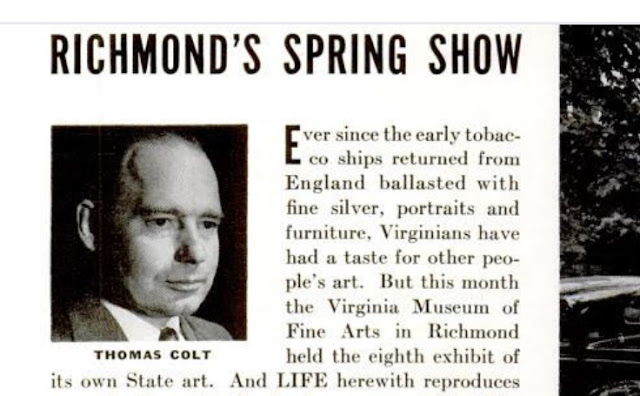 
Ever since the early tobacco ships returned from England ballasted with fine silver, portraits and furniture, Virginians have had a taste for other people’s art. But this month the Virginia Museum of Fine Arts in Richmond held the eighth exhibit of its own State art. And LIFE herewith reproduces examples from this lively show as proof that Virginians, artistically, are now competent to give it as well as take it. Most vitalizing force in Virginia’s new art era is the Richmond museum itself, under the directorship of 26-year-old Thomas Colt (above). One-man shows of Virginia artist are held here several times a year and the museum annually offers three fellowships totaling about $2,500 for art study any place in the country. Most astonishing fact about the current exhibition is that the average age of the 85 exhibitors is under 30. Instead of awarding prizes, the museum buys their best art for its permanent collection. On the opposite page is Marion Junkin’s "First Robin," one of the paintings bought this year. Binford’s "The Crap Shooter" is being considered for purchase. 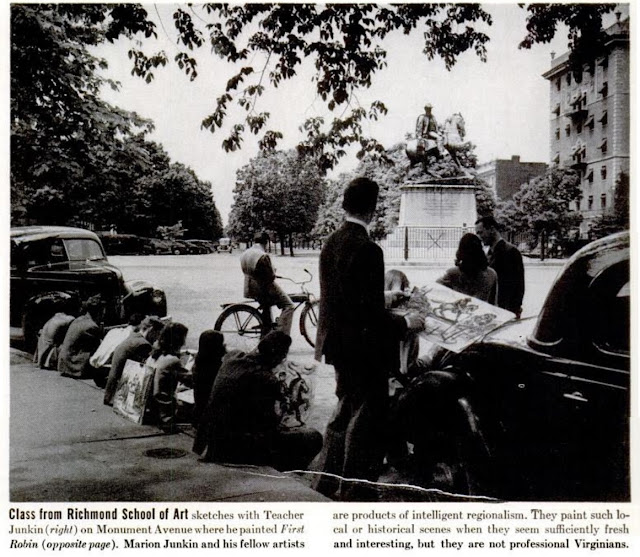 Class from Richmond School of Art [Richmond Professional Institute's School of Art - RPI merged with MCV to become VCU in 1968] sketches with Teacher Junkin (right) on Monument Avenue where he painted First Robin (opposite page). Marion Junkin and his fellow artists are products of intelligent regionalism. They paint such local or historical scenes when they seem sufficiently fresh and interesting, but they are not professional Virginians. 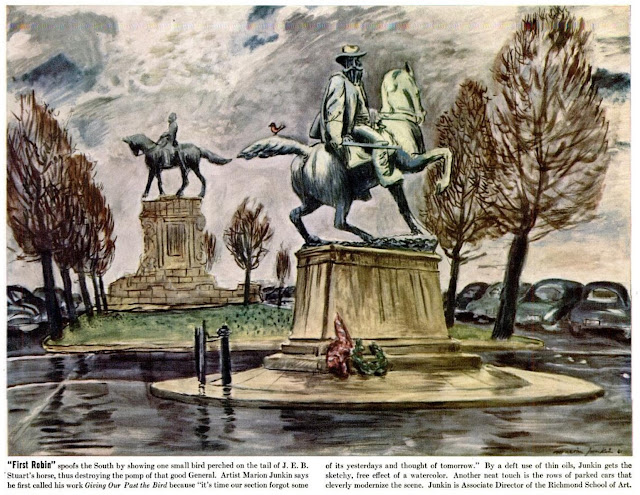 “First Robin” spoofs the South by showing one small bird perched on the trail of J.E.B. Stuart’s horse, thus destroying the pomp of that good general. Artist Marion Junkin says he first called his work Giving Our Past the Bird because “it’s time our section forgot some of its yesterdays and thought of tomorrow.” By a deft use of thin oils, Junkin gets the sketchy, free effect of a watercolor. Another neat touch is the rows of parked cars that cleverly modernize the scene. Junkin is Associate Director of the Richmond School of Art [actually it was the School of Art at Richmond Professional Institute]. 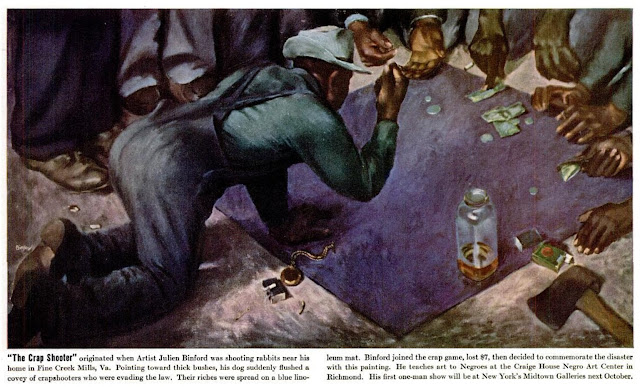 “The Crap Shooter” originated when Artist Julien Binford was shooting rabbits near his home in Fine Creek Mills, Va. Pointing toward think bushes, his dog suddenly flushed a corey of crapshooters who were evading the law. Their riches were spread on a blue linoleum mat. Binford joined the crap game, lost 87, then decided to commemorate the disaster with this painting. He teaches to Negroes at the Craig House Negro Center in Richmond. His first one-man show will be at New York’s Midtown Galleries next October. 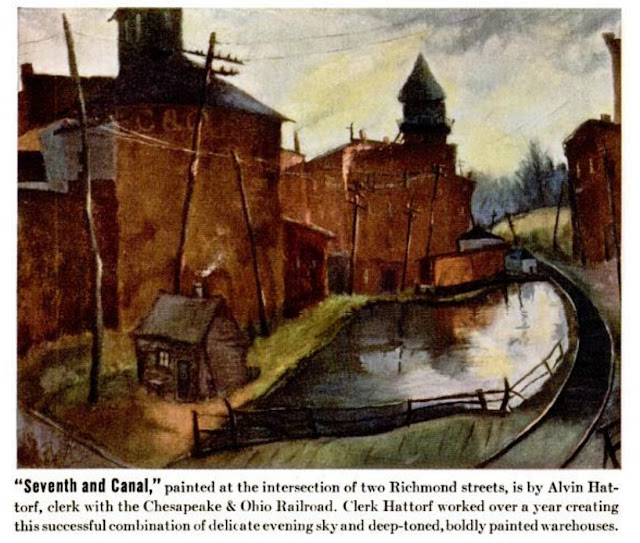 “Seventh and Canal,” painted at the intersection of two Richmond streets, is by Alvin Hattorf, clerk with the Chesapeake [and] Ohio Railroad. Clerk Hattorf worked over a year creating this successful combination of delicate evening sky and deep-toned, boldly painted warehouses. 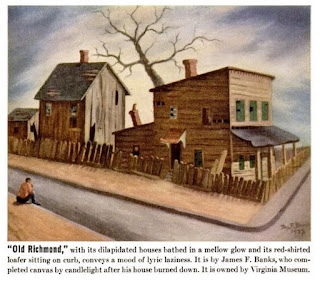 “Old Richmond,” with its dilapidated houses bathed in a mellow glow and its red-shirted loafer sitting on curb, conveys a mood of lyric laziness. It is by James F. Banks, who completed canvas by candlelight after his house burned down. It is owned by [the] Virginia Museum. 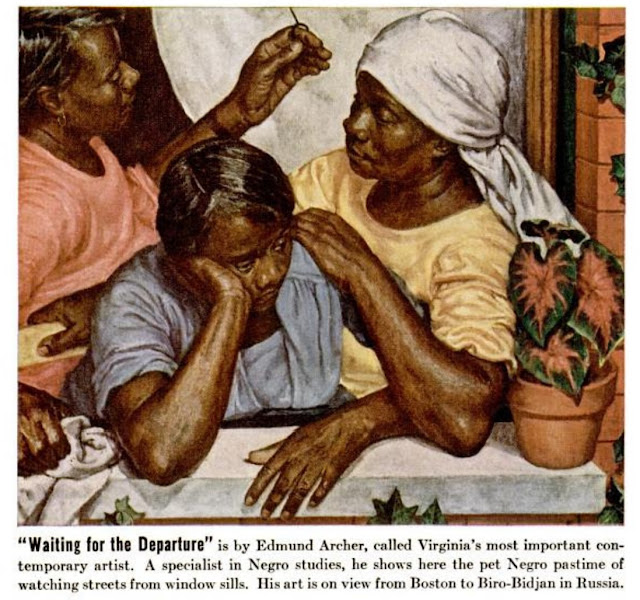 “Waiting for the Departure” is by Edmund Archer, called Virginia’s most important contemporary artist. A specialist in Negro studies, he shows here the pet Negro pastime [yikes] of watching streets from window sills. His art is on view from Boston to Biro-Bidjan in Russia. 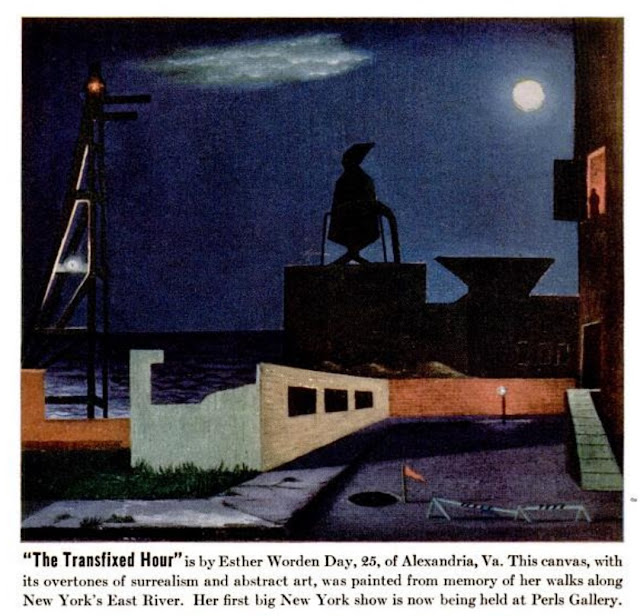 “The Transfixed Hour” is by Esther Worden Day, 25, of Alexandria, Va. This canvas, with its overtones of surrealism and abstract art, was painted from memory of her walks along New York’s East River. Her first big New York show is now being held at Perls Gallery. 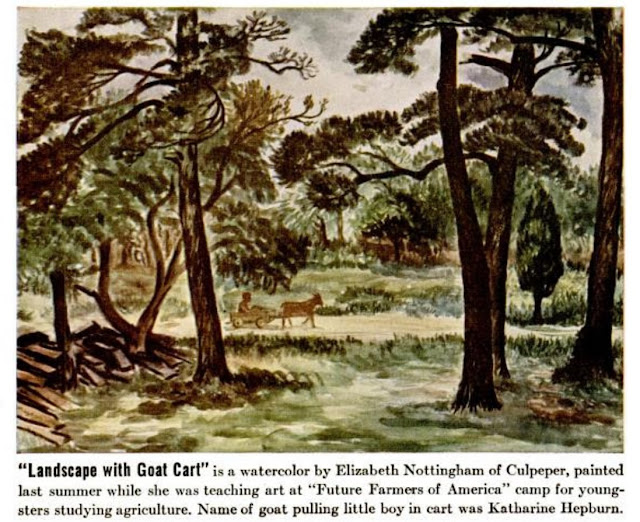 “Landscape with Goat Cart” is a watercolor by Elizabeth Nottingham of Culpepper, painted last summer while she was teaching art at “Future Farmers of America” camp for youngsters studying agriculture. Name of goat pulling little boy in cart was Katherine Hepburn. 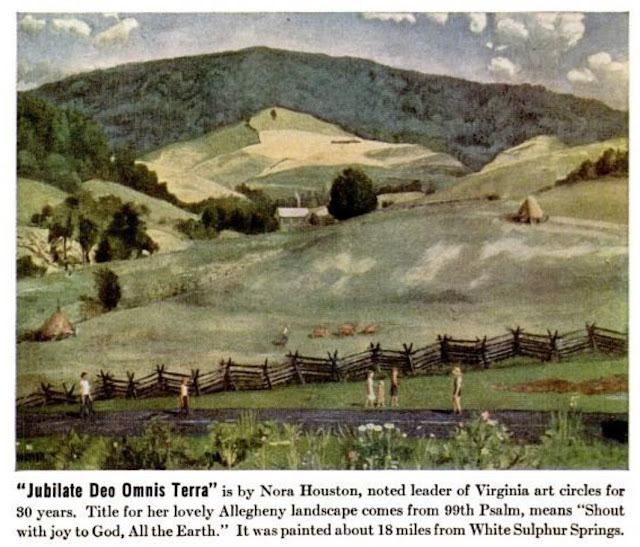 “Jubliate Den Omnis Terra” is by Nora Houston, noted leader of Virginia art circles for 30 years. Title of her lovely Allegheny landscape comes from 99th Psalm, means “Shout with joy to God, All the Earth.” It was painted about 18 miles from White Sulphur Springs.

Thanks - and yes, some really interesting paintings. Wish the showed more from the show. - Ray.